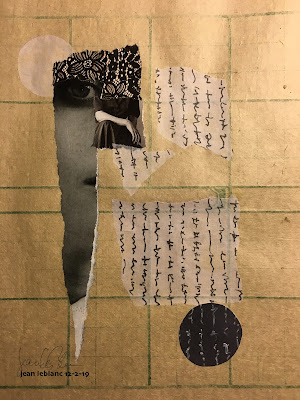 Does poetry and art matter? I keep writing poetry and making art. That's not exactly an answer to the direct question of whether or not such things matter in this downward-spiraling world, but the very act of creating something is a response. I have spoken before about poetry and art (and music, dance, photography, sculpture, etc.) being the creation of order amidst the chaos. What little I can do (along with teaching), I do—mostly for my own sanity, but that's no small thing, either.

A new poetry collection is due out in 2020. I am the featured artist in the current edition of The Cascadia Subduction Zone, something I found out was going to happen back in June, and now has become a reality. Small things such as this (well, actually it's a huge thing for me) keep me going. I hope such things keep you going, as well. May our creative spirits see us through.
Posted by Jean LeBlanc at 3:42 AM 1 comment: 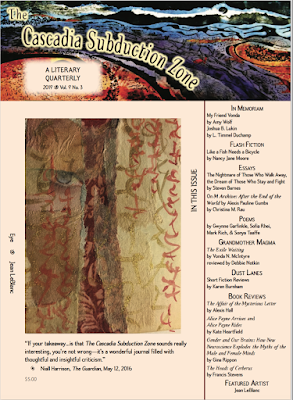 Featured Artist—I never thought I'd have that phrase applied to me. Mark that as one more thing I'm wrong about! I'm the featured artist in the new issue of the Cascadia Subduction Zone, a quarterly literary magazine put out by Aqueduct Press. They know my work because they published my poetry collection, A Field Guide to the Spirits, in 2015.

Please consider purchasing a copy. You can download one for $3.00, or order a paper copy for $5.00 Here's the link.

Thank you for all your support of my poetry and art. More posts coming soon, I promise!
Posted by Jean LeBlanc at 12:59 PM 1 comment: 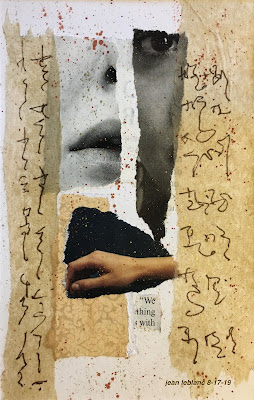 In my previous blog post, I spoke of "the nexus of narrative and lyric." This is something I've been pondering for years, in my own work as a poet and in my work as a teacher of poetry. Every time I say to myself or to a class, "This is a narrative poem" or "This is a lyric poem," it feels wrong, or at best incomplete. In the poems I write and the ones I choose to teach, there's always imagery and description and the sense of a moment being explored and maybe even dissected—the qualities of lyric. And there's always a story there, sometimes a fully-fledged narrative and sometimes an implied backstory or subtext that the poet invites (dares?) the reader to perceive. As readers, we cannot help but perceive—or create for ourselves—the story. A story. One or more of many possible stories.

This helps me understand asemic writing and my own experiments with abstract poetry. There's a story here—there are many possible stories here. "We thing with"—a fragment of text that is "readable" (to speakers of English) yet without inherent grammatical meaning or context, plus what looks like "writing" but is unreadable because it's abstract. A few images recognizable to any human being, yet themselves somehow removed from context, from the "grammar" of imagery.

In his book Strange Tools: Art and Human Nature, philosopher Alva Noe writes that the "art" of art lies "in what we can't see, or in what the piece affords as a possibility for discovery." As I type that, I think of my students who ask some variation of, "Did the poet intend that image to symbolize ______?" Does the artist know—can the artist know—all the possible meanings her/his work will hold for viewers/readers? Can we perceive ahead of time (before our visual artwork is seen by others, or before our words are read by others, or before our music is heard by others) all the possible meanings? Can we mean everything, or do we always mean more than we ourselves know? 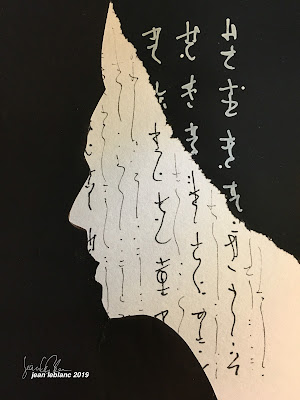 This abstract calligraphy—asemic writing as it's called by its devoted practitioners—has opened new avenues of creativity and cognition for me. Today I pondered the concept of asemic poetry. I consider this collage/calligraphy piece pictured here an asemic poem, which is another way of saying an abstract poem. The image provided by the collage elements give a starting point for any "reader" to project narrative or lyric meaning. This art form is also an interesting way to explore the nexus of narrative and lyric.

More on these topics in future posts...
Posted by Jean LeBlanc at 3:37 PM 2 comments: 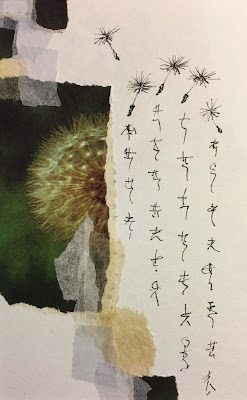 Imagine someone writing this about her father:

The man about whom that was written was Leslie Stephen, an eminent-in-his-own-mind Victorian. (Was there any Victorian male who was not eminent in his own mind?) His daughter, who wrote those words in her diary, was Virginia Woolf.

I say this because it was also Virginia Woolf who famously called Middlemarch "one of the few English novels written for grown-up people." This seems plain and straight-forward, until one adds the knowledge that her father had himself written a book on George Eliot, a patronizing study of a famous novelist read not for her talents as a writer but because people felt they "should" read her.

Woolf is saying, "My father was not a grownup." She also writes in her essay "George Eliot" about "the late Victorian version of a deluded woman who held phantom sway over subjects even more deluded than herself," again a veiled reference to the patronizing view of Eliot [and perhaps all women of talent, imagination, and intellect] as exemplified by her father's book.

"His life would have entirely ended mine," Woolf could admit in her diary. In her public writing, she all but called her father a child. It is a bittersweet revenge, but something that I think of often as I read American and British literature in the light of how that literature was received in its time and how it has withstood the tests of time.

In Middlemarch, George Eliot returns to the subject of pity, and how nothing kills love faster. Even Leslie Stephen picked up on this, when he wrote of Causabon, "No doubt there is a pathos in devotion to an entirely mistaken ideal." Little did Leslie Stephen realize he was writing his own epitaph.
Posted by Jean LeBlanc at 5:20 AM No comments: 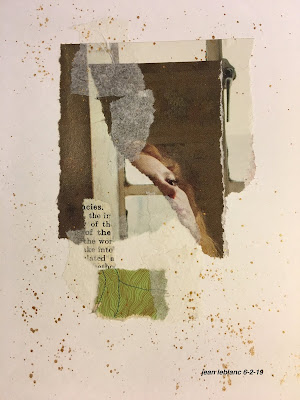 Last night, as I read the last seventy-five pages of this—"novel" doesn't seem the right word; one wants something that means "world in a book" or "life woven from paper and ink"—okay, novel, I was deeply moved by this line. This is Dr. Lydgate, after a significant conversation with Dorothea Causabon. Dr. Lydgate, I should mention, had never before considered the possibility of having a significant conversation with any woman. But as he leaves her house a changed man, having been honest for the first time with another human being and with himself, he thinks, "She seems to have what I never saw in any woman before — a fountain of friendship toward men — a man can make a friend of her."

This is the tragedy of which I wrote in yesterday's blog post, the tragedy that it doesn't occur to these men until after friendships must be severed that friendship was possible in the first place. This is a novel about friendship, in that it depicts people who have no friends. Trivial acquaintances are in abundance, but no one in this novel knows how to be or make a friend.

After reading my blog post yesterday, my husband George said, "Don't we have Middlemarch on DVD? Let's watch it." When we realized we have a set of DVDs with dramatizations of five George Eliot novels, my George said, "It will be a George Eliot summer."

This is why one marries one's best friend.


Posted by Jean LeBlanc at 4:01 PM No comments: 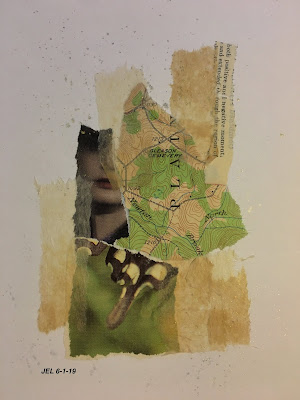 I have been spending these past several days of my summer break reading one of my favorite novels, Middlemarch by George Eliot. Every fifty pages or so (I'm in the 700s) I think, I should go write a blog post about this...but then I just keep reading. So now the blog posts I felt were so necessary have built up in my mind into a towering impossibility. Forgive me, then for resorting to bullet points: